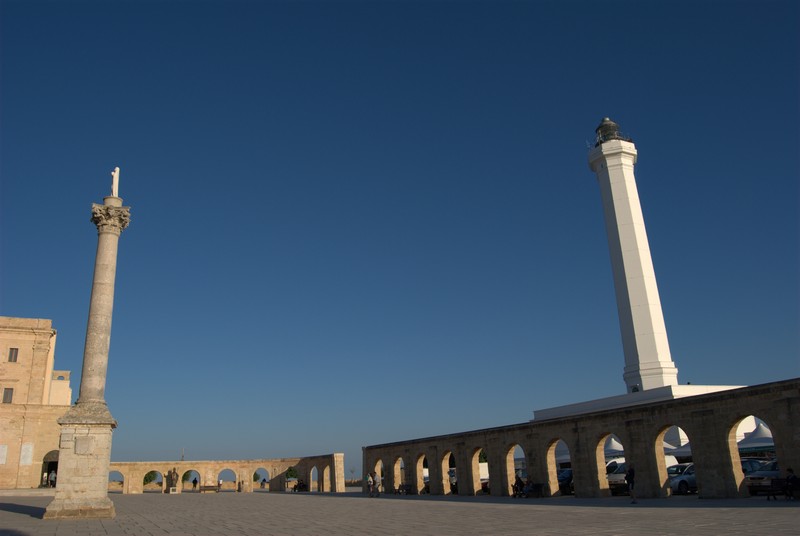 Santa Maria di Leuca sits on the southernmost tip of the Salento peninsula, bathed by two seas, the Ionian Sea to the west and the Adriatic Sea to the east. Subdivision of the town of Castrignano del Capo, Santa Maria di Leuca is a tourist center famous for its colourful natural landscapes that blend in with its majestic architecture.

In the town centre is the Roman and Gothic style Cristo Re Church, while the Santa Maria De Finibus Terrae Basilica is located on the Japigo promontory. It is said that this Basilica was once a temple of the goddess Minerva, transformed into a place of Christian worship by St. Peter who stayed there on his journey to Rome. On the square in front of the Basilica stands the Mariane column before which stands the imposing lighthouse of Leuca, 102 meters high and 48 meters above sea level. From the Basilica you can reach the old port on foot via two ramps of 300 steps stairs which surround an artificial waterfall. This impressive route ends on a Roman column.

The numerous nineteenth century villas set the tone of the architectural ambience of the marina.

Regarding its nature, Santa Maria di Leuca is particularly appreciated by diving and paleontology enthusiasts. There are indeed many caves in the region which point to the presence of man since prehistoric times: the Rada caves, the Ponente caves and the Levante caves. Among the most famous and visible from the mainland there are the Porcinara cave and the Devil's cave. Equally important are also the Fiume cave, the Treporte cave, the cave of the Giants, the Stalla cave, the Dragon's cave and the big Ciolo cave.