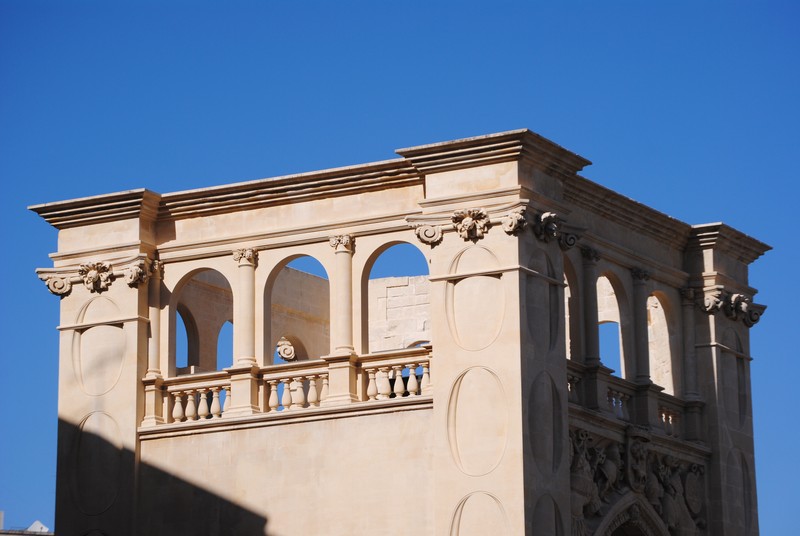 This itinerary takes place entirely in the city of Lecce, where it is possible to see many historical exhibits as well as the celebrated Baroque style buildings which make Lecce one of the most beautiful cities in Italy, to the extent of earning it the name of ‘The Florence of the South’.

Our journey begins at the Castle of Charles the fifth, (Carlo V), built by the architect Gian Giacomo dell’Acaya between 1539 and 1549. It is built on a trapezoidal plan with 4 bastions. Entrance to the defensive structure, once encircled by a moat which was filled in in 1872, is gained through two doorways: ‘Porta Falsa’ and ‘Porta Reale’, the real and false gates.

The oldest part of its interior consists of a quadrangular keep from the Angevin Period, whose underground section has been made into a chapel with a Baroque altar. The other chapel in the castle is dedicated to Saint Barbara.

From here we move to Piazza Sant’Oronzo, whose original appearance has completely changed following the discovery of the Amphitheatre.  Academics think it was erected in the second century A.D. It measured 102 by 83 metres, with an arena of 53 by 34 metres and it is thought that it could hold about 25,000 spectators. The old square, successively built up from the Middle Ages to the nineteenth century occupied the space where the amphitheatre now is, while the present one is in the area once occupied by now demolished shops.

The church of Santa Maria della Grazia (designed by the Theatine Michele Coluccio in 1585) sits on the unexcavated part of the ancient monument. The Roman Amphitheatre was discovered by chance in 1929 and the parts of it which are now visible are the cavea, where animals were kept prior to combat, the orchestra floor, made of large regular stone slabs and the stage. The statues are kept at the Provincial Museum. Recently, some bas-reliefs and columns have been restored and can be seen inside the excavated tunnels of the amphitheatre at a depth of about seven metres below street level.

Still in Piazza Sant’Oronzo we find the Sedile and the Colonna di S.Oronzo (Saint Oronzo’s Column). The Palazzo del Sedile, restored between 1588 and 1592, was built at the behest of the mayor, Pier Mocenigo and it was the University offices (Municipal Government) until the middle of the nineteenth century. It is used today to house art and other exhibitions. On the Roman column, which was brought from Brindisi to Lecce in the seventeenth century, the eighteenth century statue of Saint Oronzo is placed. The present statue is made of wood clad in copper. The original statue was erected by Giuseppe Zimbalo in 1666 to carry out a vow made by the citizens during the plague of 1656.

The adjacent renaissance Chiesetta di San Marco, (1543), shows, with its winged lion, the stamp of authority, economic included, of the Venetian colonization of Lecce.

Through Via Augusto Imperatore, you reach Piazzetta Vittorio Emanuele 11. Here the Chiesa di Santa Chiara (St. Caire’s Church) can be seen. It was built by Giuseppe Cino in 1687 and boasts an elegant façade adorned with a rich portal. Taking the road to the right of the church you come to the Roman Theatre, whose construction, like that of the Amphitheatre probably dates back to the Antonini period.

Not far from Piazza Sant’Oronzo is the Chiesa di Santa Croce (1549-1689) the most characteristic manifestation of Lecce Baroque, with its adjoining convent (1659-1695). The construction of this masterpiece came about at the behest of the Celestine fathers. A gallery supported by telamons,(colossal human figures), and zoomorphic decorations separates the first tier imitating classical style, attributed to Gabriele Riccardi, from the second typically Baroque one, the work of Cesare Penna. The central nave is covered by a coffered ceiling rebuilt in the eighteen hundreds and there is a dome, built in 1590, where the transept crosses the nave.

On the left is the Chapel of San Francesco da Paola, characterized by its twelve scenes from the lives of the Saint, modelled and crafted by Francesco Zimbalo in 1614. The adjacent Celestine convent with its splendid cloister, is now the headquarters of the Lecce Provincial Authority. At this point we are moving on to the Church of Saint Irene, which was begun in 1591 and completed in 1639 and was dedicated by the Theatines to the saint who protected the city. The church has a mannerist façade in the Roman style, with the insignia of the city and a statue of Saint Irene.

The interior is a Latin cross with a single nave and fine side chapels painted by Oronzo Tiso and Giuseppe Verrio. In the left transept there is a panel with a 1650 view of the city.

Continuing our walk through the streets of the old centre, we make our way to Piazza del Duomo. Once there you can admire the spectacular entrance to the splendid expanse of the piazza which consists of  propylons designed by Emanuele Manieri. On the East side of the Piazza is the Campanile (Bell Tower) rebuilt between 1661 and 1682 by Giuseppe Zimbalo. For scenographic reasons the Duomo,(Cathedral), built in 1659 over an earlier Romanesque building by Giuseppe Zimbalo at the request of Bishop Pappacoda, has a sober main façade and a false lateral facade facing the Piazza. In the interior, in the apse of the high altar you can admire some large paintings by Oronzo Tiso. On the altar of our Lady of the Annunciation there is a sixteenth century nativity scene by Gabriele Riccardi.

The evocative quality of the piazza is added to by the Palazzo Vescovile, (Bishop’s Palace) remodelled by Manieri in the seventeen hundreds. On its right is the Palazzo del Seminario, built to a plan by Giuseppe Cino between 1694 and 1709 and commissioned by bishops Michele and Fabrizio Pignatelli. It has a characteristic façade covered with smooth ashlar and a portal surmounted by a graceful three arched loggia.

From the Piazza del Duomo we go on towards Porta Rudiae. Before reaching it, however, in Via Libertini, we find the Church of St. John the Baptist which was built at the end of the seventeenth century to a design by Giuseppe Zimballo. It was not to be completed until after his death and was consecrated in 1728. It has a Baroque façade with soaring vertical lines, emphasised by the tall and robust spiral columns topped by acroters carrying vases. The interior is designed on a Greek cross plan around an octagonal space and there is a dome over the transept.

Porta Rudiae, which leads out to the ancient Messapic city of Rudiae, fell down at the end of the seventeenth century and was rebuilt in 1703. Besides the statues of Saints Oronzo, Irene and Dominic on the ledges there are busts of the legendary founders of the city of Lecce.

Other historic artistic monuments worth a visit are the Chiesetta di San Giovanni di Dio, built between 1738 and 1742 on the ruins of another church by Mauro Manieri, Piazetta Falconieri with the notable eighteenth century facades of the Palazzo Marrese and Palazzo Palmieri. Then there is the Teatro Paisiello started in 1872 to a design by Oronzo Bernadini and rebuilt on the site of an earlier theatre, the Chiesa dei SS.Niccolo a Cataldo built in 1180 at the behest of Tancred, Count of Lecce, and the former Convento degli Olivetani now premises of the University of Lecce. There is also Porta Napoli otherwise called Arco di Trionfo, (triumphal arch). It is 20 metres high and was built in 1548 to a design by Gian Giacomo dll’Acaya in honour of Charles the fifth, whose coat of arms can be seen on the pediment. This is the most prestigious entrance to the city. Near to the gate is the Obelisco fashioned in 1822, the work of Cosimo Vito Carluccio.