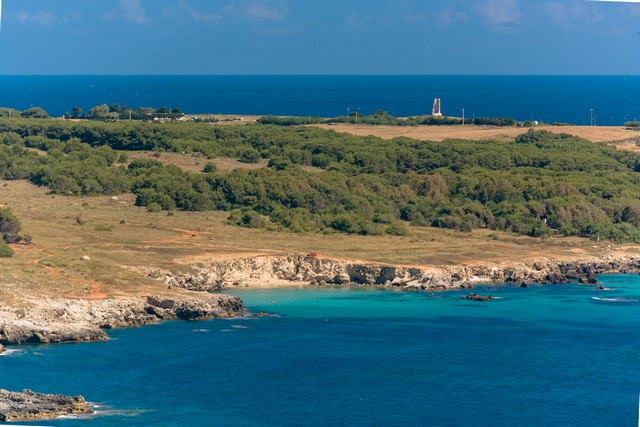 Our journey begins in San Foca a happy seaside centre, characterised by it small touristic port which faces the old watch tower. A few kilometres from San Foca is Roca, an ancient village of great beauty and archaeological interest. From there we reach Torre dell’Orso, where you are immediately struck by its beautiful bay, with its sandy beach and pine trees. Continuing in a southerly direction we leave the coast for a short time in order to reach the area of the Alimini ( now a protected oasis and nature reserve for faunistico-venatoria) and for some time has been developed as an important seaside centre in Salento. Leaving this centre of tourism we will proceed towards Otranto “door to the Orient”.

Taking the state road number 173, one will arrive after about 10.5km from Otranto, to Porta Badisco, a small seaside village well-known  for the grotto dei Cervi. The fjord from which Porto Badisco rises is cast headlong into a sea with a thousand reflections, with a high rocky coast and small narrow coves. It consists of a small groups of houses and few but good trattorias which offer freshly caught fish and sea urchins sold from stalls along the roadside. Continuing on our journey along the coast, after about 6km we will reach probably one of the most beautiful places on our itineraries Santa Cesarea Terme, famous above all for the quality of its spa water, but also for its elegant roads and summer houses. The waters, as previously mentioned ,in the curing properties are particularly useful in the treatment of skin and articulation problems, and flow out of four connected grottos one after the other. About a 1km from the centre of Santa Cesarea we will come to Castro, which has one of most beautiful coves along the coast. This is a typical seaside centre carefully placed on the coastline, developed firstly because of its position on the headland and secondly because of its marina. It is divided in two Castro Marina and Castro Superiore. It is well-known  for its fascinating grottos which still have traces of their prehistorically inhabitants. From Castro to Tricase the coast road unwinds for a further 17 km, between light slopes to more decisive climbs, with scenery full of lush vegetation, fig trees, oleanders, olive trees and pines. The road passes through numerous small villages including Marina di Marittima and Marina di Andrano, small places with low built white houses, half hidden by trees.

After passing through Marina di Novaglie with ilCiolo, a beautiful fjord, that today is unfortunately crossed over by a bridge, but all in all does nothing to rob it of its great beauty, and after a few kilometres we will finally arrive in Santa Maria di Leuca. Leuca is able to offer incredible scenery , where the sea laps over the thousands of caverns hidden in the rocks, and where bays and fjords offer protection for landing. A quiet Mediterranean locality, as well as offering its natural beauty, is able to offer every comfort for a holiday of your dreams, in entertaining you and helping you relax. There are numerous grottos along this coast with rough stones, worn down by the wind and eroded by the sea.

After visiting the eastern coastline nothing remains but to visit the Ionian coast. From Leuca to Gallipoli the coastline is flat, with low rocky headlands alternating with sandy dunes. Many tourists are attracted to this part of the coast, with its excellent beach facilities, hotels, holiday villages and campsites which have grown in the area. We then, pass through without interruption; Torre Vado, Marina di Pescoluse, Torre Suda, Torre Mozza, Marina di Mancaversa and Torre San Giovanni. Suggestive scenery with its strips of pine trees, large sandy beaches with fine white sand, with sand dunes and sea scrub, opening into the sea. The best camp sites are situated under splendid pine trees, offering their guests shaded restaurants, out of the hot summer sun. Particular attention should be paid to the village of Ugento, considered a goldmine for its archaeological finds. We would also like to underline the fact that the sea here is at its most inviting, with the bottom of the sea clear, reflecting the transparency of the water. Now we will continue towards Gallipoli, which will hit you with its atmosphere, its Mediterranean smells and its colours. Characterised by its clear division of the city into two parts, the old and the new city. On the coast, going towards the west we will come to the Scoglie dei Piccioni (cliffs), while to the south east appears the Isola di Sant’Andrea. The city can be considered one of the fastest growing tourist areas in Salento.Going north from Gallipoli as far as Porto Cesareo, there is wealth of beautiful seaside places like Santa Maria in Bagno, Santa Caterina, Rivabella and of course Porto Cesareo. This last seething seaside town with is old centre, developed around the usual tower, in the summer months fills up with crowds walking around the area in front of the port.

Here ends our itinerary along the Salento coastline, a journey which will leave you feeling amazed by the great beauty and variety of scenery you have seen.