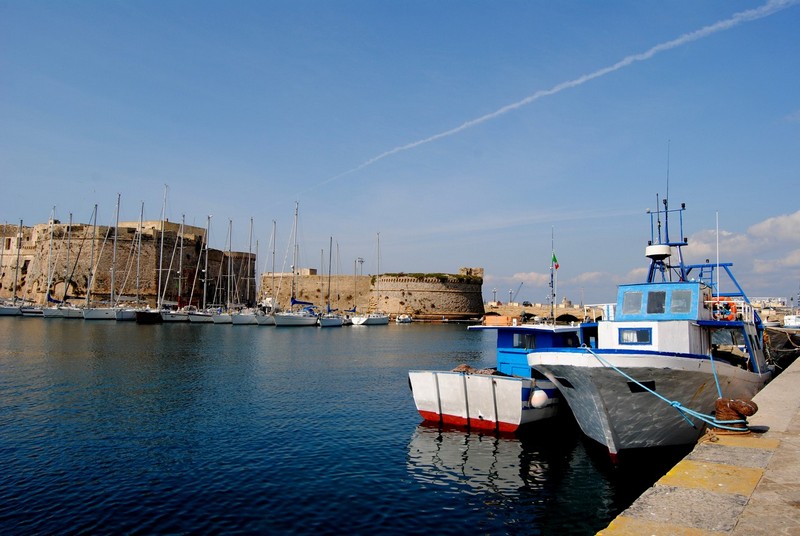 The itinerary begins with Gallipoli (from the Greek Kale polis, beautiful place).  It has an oriental look and is white, reminiscent of a town on the Cicladi islands. The town juts out into the sea with a promontory and a little island joined to the mainland by a bridge. It is known for its oil, its wine and its fish, while in recent years it has become increasingly popular as a holiday resort.

The Cathedral. Set in a tiny square, the eye can only just manage to take in the whole front of the building with its fanciful sculptures made from the unusual brownish Carparo stone, which is as versatile as Lecce stone. Consecrated to S.Giovanni Crisistomo, it has been dedicated to Saint Agatha, the Catanian virgin since 1126.

In the Pinacoteca della Cattedrale, (Cathedral Art Gallery) there are artistic works by Salentine painters from the sixteen and seventeen hundreds.

The biblioteca civica, (the municipal library) contains about thirteen thousand volumes, including 32 incunabili, precious manuscripts and sixteenth-century editions. In the area adjacent to the cathedral the Seminario (seminary) and the Chiesa di S. Teresa (Church of St. Teresa) are situated. Adjoining the church is the old Convento delle Carmelitane Scalze, (the Convent of the barefooted Carmelite Nuns), with its fine altars.

Approaching Gallipoli by sea you can understand how the churches with their lively colours and bell towers used to be, and still are, clear points of reference for fishermen.

One such church is the Chiesa della Purita, (Purity), home to the dockers’ fraternity. Its façade has a triptych in majolica depicting the virgin and child with Saints Joseph and Francis of Assisi on either side. There is a fine majolica pavement and a gorgeous interior adorned with four large canvases by Liborio Riccio.

Others are Chiesa di S.Domenico  or del Rosario (the Rosary), one dedicated to Madonna degli Angeli (Our Lady of the Angels) (1606), the Crocefisso (Crucifix), (1741) built by the ‘bottai’ (barrel makers), S.Francesco d’Assisi (St. Francis of Assisi) or del Malladrone. This is of thirteenth century origin and is notable for its façade, its wooden sculptures and a sixteenth century fresco of the Venetian school.

The Chiesa del Canneto (reed bed) hears the prayers of fishermen prior to a fishing trip and their imprecations when, in the shadow of its doorway, they talk about the long tiring days spent at the mercy of the sea. The construction goes back to the twelfth century, although it has been altered several times, not least in the fifteen and sixteen hundreds.

The Fontana Greco-romana is thought to be the oldest monumental fountain in Italy. A kind of joining point between the island and the new town it was for centuries and until only a few decades ago the only spring available to the people of Gallipoli. It goes back to the period of transition between Greek and Roman rule. In the second half of the sixteenth century it was taken down and rebuilt where it now stands in the so-called ‘del Canneto’ (reed bed) district.

In a port town like Gallipoli, the object of many invasions through history, there was bound to be a solid defensive structure like the Castello (castle) guarding the sea and defending the town. Repeatedly altered over the centuries it retains its original quadrilateral layout to which has been added successive layers of building. Above all in the summer season the castle takes on a cultural role with shows, art exhibitions and craft shows. Its powerful walls and its towers take one back to an era of violent warfare but also to a place where, especially in the Spanish period, sumptuous receptions and feasts took place.

There are some fine municipal buildings, mostly baroque with traces of the Renaissance, which cannot pass unnoticed. One of these houses the   small but extraordinarily interesting Museo Civico (Municipal Museum).

The city wall, with twelve strongholds, towers or bastions, still entirely encircles the island over a distance of ‘mille canne’ (a thousand reeds), equivalent to two kilometres. Seen from the sea it looks solid and imposing.

To the west of Gallipoli in the centre of a wide stretch of open water where there is a ‘Poseidon meadow’, a type of algae which grows in the Mediterranean, lies L’Isola di S.Andrea (St. Andrew’s Island) or Risula to the inhabitants of Gallipoli.

The island seems desolate, burnt by the salt, the sun and the wind, with signs that man in not too recent times has used it as a military outpost.

Moving South, over rugged land with bushes rather than pine forest, on the Southern point of the bay of Gallipoli the ‘Pizzo’ stretches out. It is a promontory not unlike that on which the city stands. On this promontory, known as Punta Cutreri stands the circular ‘Torre del Pizzo’

Continuing south we come to Ugento noted today for its cultivation of tobacco. It derives its name from the old Ausentum of prehistoric times. An Old messapic town with some megalithic remains, it was held by the  Romans under the name of Uzentum. Numerous tombs have been found there with vases, coins and Messapic and Latin inscriptions.

Witnesses to the glorious past of this populous Salentine centre are : the Castello (castle) (thirteenth century), the Palazzo Vescovile (Bishop’s Palace) (eighteenth century) the Cattedrale (Cathedral) (eighteenth century) and numerous noble residences. Destroyed and rebuilt many times it is now establishing itself as an important agricultural centre.

From Ugento, still moving southwards, we come to Santa Maria di Leuca the outermost limit of Italy, where the waters of the Adriatic meet those of the Ionian Sea. On a clear day the dividing line between them is visible. Santa Maria is charming with its Moorish villas, which are set off by the white cliffs, and with its succession of grottos which can be found along the coast.

The Grotta del Diavolo, (Devil’s Grotto), is also easily accessible overland via an opening about 4 metres high and 2 metres wide and by a tunnel which slopes downwards for several metres, into a domed cave.            Excavations have unearthed a huge range of tools and ceramics used by Neolithic man for the hunting and cooking of game (deer, oxen, goats and boars)

The Grotta del Fiume, (River Grotto) so called because of a trough which dominates it, a bed carved out by an ancient river on its way to the sea.

The Grotta Tre Porte (3 doors), which owes its name to the gigantic calcareous passages by which you enter and where the water is an intense blue. On the North wall of the internal hollow, at about 3 metres above sea level, there is a gallery which finishes after about 30 metres in a large partially circular room with stalactites and stalagmites.

The Grotta dei Giganti (Giants’ Grotto) which owes its name to the bones and teeth of pachyderms found in it. They were in detrital material mixed in the red-violet earth which filled the grotto during a phase when the seawaters were receding. In the lower part of the grotto numerous Palaeolithic hearths have been found with carbon and burnt bone, while the upper part has yielded ceramic pots going back to the Bronze Age. The grotto was also lived in thousands of years later, as the various human bones show, as do the Byzantine pottery and the bronze coins of Constantine 7th and Romano 1st, all found inside.

The Grotta della Stalla, (Stable Grotto) has a large room with stalagmites and is easily accessible at low tide offering enchanting plays of light.

Situated in the inlet between Punta Meliso and Punta Ristola, the Grotta del Drago, (Dragon Grotto) so-called because of the rock inside it which resembles a dragon’s head, is about 40 metres deep, with an opening of 30-40 metres. It owes its beauty to the blue-green colour of the water, which is also reflected on its walls.

To the East of the promontory, towards the Adriatic, is the Grotta Grande del Ciolo where evidence of ancient civilization has been found.

Also worth a visit are the Grotte di Terrarico, the Grotte di Verdusella, the Grotta di Ortocupo, Grotta la Cattedrale and the Grotta della Vora, a cavity more than 25 metres high with a ceiling characterized by a pothole which creates fantastic plays of light.

Il faro (the lighthouse) which marks the ‘parting’ between the Ionian and the Adriatic, dominates the landscape, and the sanctuary dedicated to Saint Mary (S.Maria) (built in 1720) is settled on a white rock and is also known as ‘de finibus terrae’ (Land’s end). The Santuario di S.Maria is positioned at one ‘end of the world’ with at its other ‘end’ another sanctuary in Normandy on a rock in the Atlantic, the Point de Raz. According to popular belief it is necessary to make a pilgrimage there at least once in your life in order to gain entrance to Paradise.