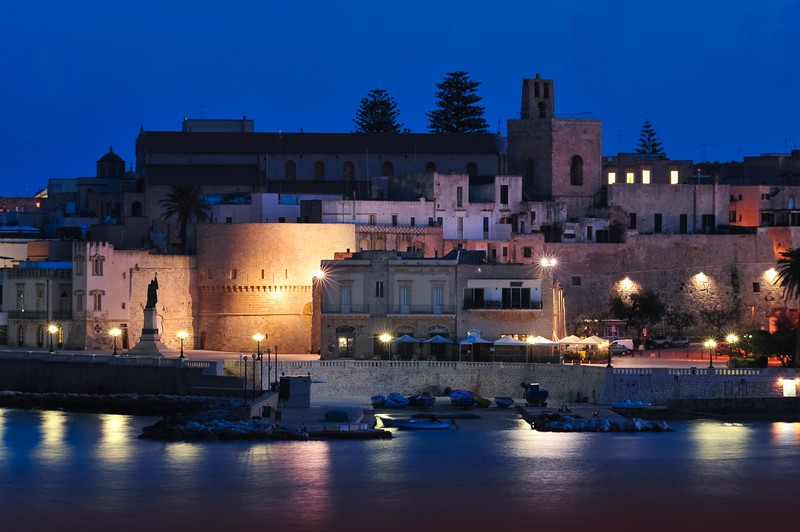 This itinerary begins in Otranto, one of the many fortified cities of Salento, which was for centuries called “Terra d’Otranto”. The name derives from the river Idro (which means water), in Latin Hidrun-tum, which flows into the port. A Greek city which was under great expansion when it passed to the Romans, who then preferred Brindisi as a port.

The “Terra d’Otranto” which is still considered even today a Greek island by those who visit the city and the surrounding area, one can perceive from its monuments and in its popular traditions, constant in its spirit of Hellinism. The Greekness of Otranto is also present in its language, the people of Salento still speak “Griko”, a language which has its origins in ancient Greek. This small city which was also Byzantine, Gothic, Norman, Sveva, Angioina and Aragon has conserved its medieval character. An image which is not only emblematic but indelible is that of what remained after the Turkish invasion of 1480 (the famous sacking) with the heroic resistance on the part of the citizens who were killed one by one because they refused to give up their Christian faith. The remains of 800 martyrs are still kept in the Cattedrale, the biggest church in Puglia.

From its golden age Otranto conserves only a few things, but those remaining provide an eloquent testimony. The first, is its austere Cathedral which the Ottoman hordes transformed into a refuge for their horsemen. The Cattedrale dell’Annunziata ( built with different coloured stones by a genial priest Pantaleone) has its original floor mosaic of 1163 ( one of the largest in the world) representing a gigantic tree of life, which symbolises the entire universe, with both traditional western and eastern themes, from the Old Testament, to the adventures of Arthur and the Knights of the Round Table, Zodiac signs, Hell, Heaven and the Apocalyse. According to legend Dante was inspired to write his great work the Divine Comedy after having visited and admired this precious mosaic which covers the floor of the church. The monument erected in 1088. present in the internal part on the right of the presbytery is the chapel of Martyrs, were their remains are conserved. In the crypt, there are five naves and apses, presenting a type of forest of stone with 168 marble columns and capitals of various styles.

In the city there are also other interesting monuments for example the Castello (the castle), built by Federico d’Aragona (1485-1498). Part of a programme of fortification on the part of the Spanish who after the massacre of 1480 decided to fortify the city with circular towers and high surrounding walls, bestowing on the historical centre a shape not unlike a big ship.

The great Torre Alfonsina (1483), providing access to the city, also the Byzantine chiesetta of 10th or 11th century of S. Pietro with its cylindrical dome, three semi-circular apses and inside the remains of frescos dating to the XIV century.

Both to the north and south of the city we can meet with headlands and hidden coves, prehistoric grottos, shorelines touched by the journey of Enea, and flawless sandunes immersed in sea scrub. To south of the city, in the direction of Santa Cesarea, one can find the famous Torre del Sepe, tied up with legends and mysteries of war and the sea, telling the story of a gigantic sea monster, who during the night leaves the sea in order to swallow the lantern oil in the lighthouse, causing shipwrecks. Following the coastal road Otranto-Leuca, it is possible to admire the remains of the Abbazia di S.Nicola di Càsole (the abbey) known as “càsole” because of its shape. Founded between 1098 and 1099 by the Normans it was a centre of Greek culture and the headquarters of an extremely important scriptorium managed by Greek monks, and attended by students from far away countries, attracted above all by its rich library.

Punta Palascìa is at the most eastern point of Italy and is a spectacular rock point, 80 metres high  in which rises a lighthouse ( no longer active) from which one can enjoy a stupendous view of the sea and the coastline.

Another highly suggestive place is S.Emiliano with its tower of the same name, and with its high position (51 metres above sea level) watching over the calcareous land and the coast below. The predominant presence of the calcareous rock has provoked a unique phenomenon of marine erosion: the “marmitta dei giganti” an enormous “saucepan” in which is found a perfect sphere of rock of more than one metre in diameter.

From Otranto we are now moving in a northerly direction towards the Laghi Alimini, with their elongated shape, running parallel to the coast, extending both from the North and South. This connection with the sea allows gives an economic advantage to the main basin, in the form of fish farming, but also the right conditions for botanical equipment. The two lakes are called “Alimini Grande”(Big Alimini) and “Fontanelle”.

“Alimini Grande” is almost completely surrounded by a rocky crown except for a vast northern part called Palude (swamp,marshland) Traugnano, which constitutes one of the two Apulian stations were there have been signs of the extremely rare Periploca graeca.

The northern part is cultivated and appears to be barren and studded with “mirrors”. The south eastern part, is today a protected oasis and is characterised by sharp vegetation made up of typical Mediterranean scrub.

Towards the south, Alimini Grande narrows until it connects, under the form of a canal to lake Fontanelle. Here the scenery is different , a modest rise of rock is apparent only in the part nearest to Alimini Grande. On this ridge there are several grottos, used by man in prehistoric times.

Today, Fontanelle is entirely surrounded by marshy vegetation, with thick growths of cane not present in Alimini Grande. Its water is fresh water and houses a completely different flora and fauna. The western part is barren and has a predominantly herbaceous vegetation stretching as far as Sorgente Colacchio.

The coastal zone is characterised by a long beach, with a fine light grey sand.

Continuing in a northerly direction towards Torre dell’Orso, half way between the Alimini lakes  and Torre dell’Orso we find ourselves at Torre Sant’ Andrea where the sea varies between an emerald green and a cobalt blue in colour, and majestically elevated are the three isolated crags known as “Lu Pepe.” Torre Sant’Andrea is small place which has an almost wild appearance and its own particular attraction. It has been chosen by several film producers, and lately it has attracted various marketing and publicity agencies for its rare beauty.

Reaching Torre dell’Orso we can admire its beach, one of Italy’s most natural beauties, with it half-moon shape, extending more than 900 metres and its silver sand.

Continuing north along the coast road we can reach Roca, famous for its archaeological excavations, which are bringing to light one surprise after another. It seems certain that it was a mediaeval city burnt to the ground by a troop led by Akmet Pascìa, then levelled off again by Ferrante Loffredo , with the discovery of the existence of a Messipican civilisation, and finally the discovery of a fortified city, prominent until the XVII century BC, and then destroyed by fire.

Roca has been compared to the mythical Troy because if its mysteries hidden amongst archaeological remains. Even today we do not know the name of the people who inhabited it in the XVII BC, ignoring why walls were built, began by a Messapi population in the IV-III century BC and were never finished. Amongst these many mysteries there is a narrow opening regarding the ancient Messapi civilisation, but it the Etruscan civilisation that still remains an unsolved mystery. After Roca we will arrive in San Foca we will find the recently renovated tower which dates to the XVII century, and today the headquarters of the beach delegation and the harbour master’s office. One of many defensive towers found along the Salento and Apulian coast. We can find others at Torre Specchia, Roca, Torre dell’Orso. The one in Sant’Andrea has been renovated and now houses a small lighthouse for navigation purposes. The towers were wanted by Carlo V as an efficient defence system against the Turks and pirates, however the towers were built so slowly that they were not completed until several centuries after the death of the noted emperor. The tower of San Foca failed to achieve its aim. In fact the barons D’Amelj, seated in Melendugno, found cannons without any kind of ammunition.