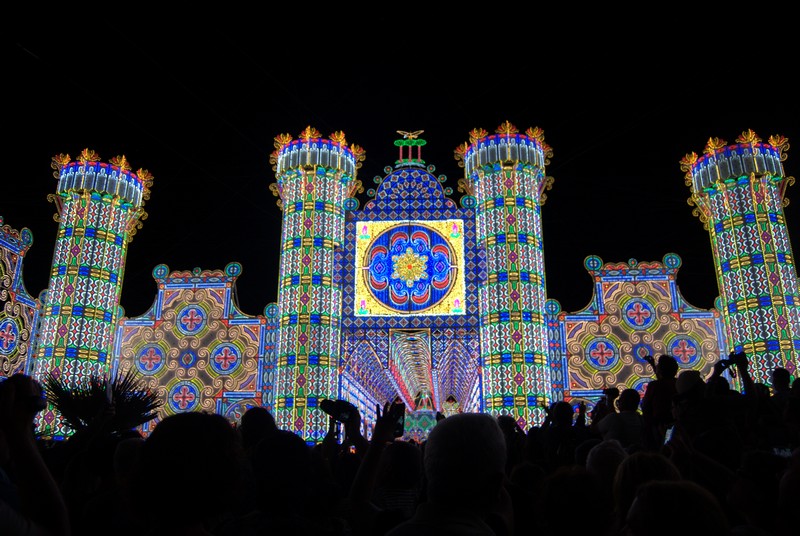 The use of illuminations and the involvement of marching bands are the main features of Patron Saint feasts celebrated in all the towns of Puglia in honour of their Patron Saints. Dating back to the Spanish domination, the Holy Week in Taranto is a commemoration of the Passion and Death of Christ during which are held various rites and processions. Renowned Patron Saint feasts are: the Feast of St. Nicholas in Bari (May 7 to 10) celebrates the arrival of St. Nicholas’ relics in Bari brought by sailors who stole them in Myra. Banners and torchlight parade, processions and folk groups are the main attractions of this feast; the Feast of Santa Domenica in Scorrano (July 5 to 9), renowned for its spectacular illuminations. These very colourful and artistic illuminations are created on wooden structures and arches of impressive height and decorate the town during the festivities; the Feast of Santa Cristina in Gallipoli (July 23 to 25) whose climax is the “cuccagna a mare” a popular game which consists in reaching the top of a greased pole; a contest of fantastic fireworks can be seen on the occasion of the Feast of Saints Idruntini in Otranto (August 13 to 15); the Feast of the Madonna di Leuca in Santa Maria di Leuca (August 14 and 15) during which a spectacular procession takes place on the sea followed by civil celebrations; the Feast of Sant’Oronzo in Lecce (August 24 to 26), which lights up the city with concerts, theatre and numerous attractions; the Cavalcata of Sant’Oronzo in Ostuni (August 25 to 27) where knights parade on horses to escort the Patron Saint's statue; a unique festival in honour of a Patron Saint is definitely the Focara of St. Anthony in Novoli (January 16 to 18), where a huge bonfire burns all night accompanying the festivities.