What’s the meaning of the Apulian pumo (ceramic pine cone shaped souvenirs) and of the local ceramic prickly pear blades? What do the objects and memories you take away with you after your trip to Puglia tell us?

You know, you don’t go away empty-handed from a trip to Puglia.
From the peculiarity of some objects, which enchant by their nature, to the goodness of food and wine, combined with the possibility of shipping them all over the world thanks to the modernization of the best artisan shops, those who come to visit us take away many things, to keep or as a gift.

Today we would like to tell you exactly what lies behind the tangible memories, the objects, the most popular souvenirs that you take away with you and that you see in the streets and craft shops of this region, so as to give them even more value.

The “Pumo”: its history and its hidden value

It will happen, walking through the narrow streets of Otranto, Lecce, Ostuni and many other places in Puglia (but above all in Salento), to see small shops that sell ceramic objects in the shape of a pine cone, but smooth. They are the pumi (or pomi), and are linked to an ancient symbolic tradition.

The name comes from the Latin pomum, meaning fruit; it is one of the symbols of the goddess Pomona, the Roman goddess of fruits and, obviously, of their symbols of prosperity, sweetness, fecundity.

The ceramic pumi have the shape not of a particular fruit but of the buds that are about to open and are therefore a symbol of fecundity and, since in ancient times children and fecundity were also economic resources for families, they have arrived also to us as a symbol of wealth and luck.

Giving them, therefore, is a wish for the recipient (local folk culture says that they bring luck only if given as gifts).

If you walk through the streets of Salento, look up, because you will not see them only in the shops but above all on the balconies of the historic centers.

This habit is ancient as well, but less than the former pagan one.

Once upon a time the ceramic pumo were not within everyone’s reach and “flaunting them” on the windowsills were an indicator of power.

The best and most famous potters who produce (among other things) pumi are in Grottaglie, in the province of Taranto.

Some of the guests spending their holidays in our villas in Salento  happen to be curious about the peculiar small glasses they find instead of chalices.

These were the classic tavern glasses, which have accompanied our tradition for a long time, before new models of drinking culture spread.

In the past, glasses purchased by individuals and hosts were made … to last as long as possible.

Hence, the small glasses that we define as “tavern” glasses (bicchieri da osteria), in the shape of a bellflower and of reduced dimensions, have become widespread: the shape makes them more resistant to shocks and falls.

Actually, not all wines need wide stemmed glasses to be fully enjoyed: wines such as Negroamaro and Aglianico, with their monochord fragrance, give their best even with our loved ones, retro small glasses.

Luminarie: we take home a piece of village festival 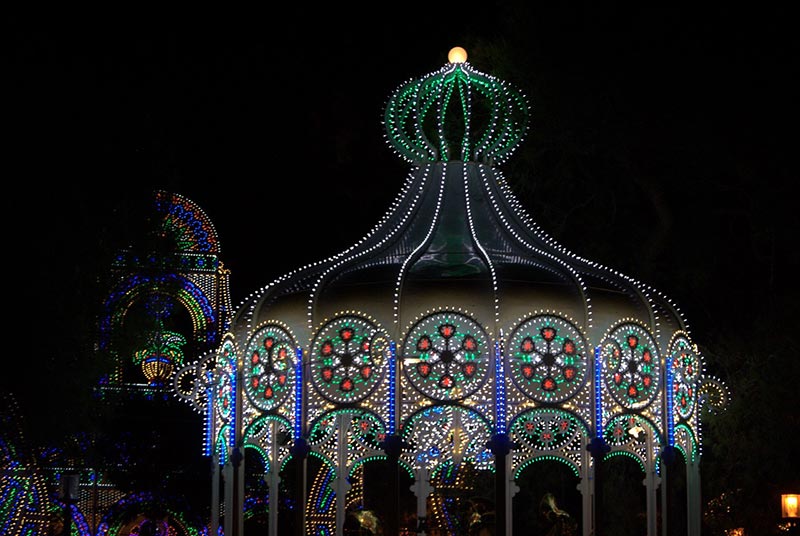 The lights of Salento, th so called “Luminarie” in particular and first of all those of Scorrano, have now international fame.

These lights are increasingly found in the beautiful artisan shops of Salento as a possible object to take away, to furnish the home.
In Salento we love to have a flower, a rose window or another symbol, sometimes specially commissioned, at the head of the bed or in a corner of the house.

For us it is like a way to keep the magic of village festivals in our hearts and in our homes.

The tradition of the luminarie di Scorrano is now famous all over the world: it is no longer a question of simple lighting but of real scenic and theatrical systems able to completely change the layout of the cities during their installation.

If you come to Salento in the first half of July, in Scorrano you can attend this show of lights and magic that has no equal in the world.

If you are looking for a unique place to stay, not far away and in the full peace of the most typical countryside of Salento, we suggest you
Palazzo Artes and Palazzo Ferras.
As you can imagine, booking several months in advance is advisable.

The prickly pear is called in Italian “Fico d’India” (Indian fig), since as it arrived from the Americas, Europe still used to call that continent “India”.

It is true that in Salento, thanks to a climate and soil favorable to their growth in a simple way, they have become a symbol of the landscape of the territory.

Increasingly dear to the Salento symbols, in recent years they have also become a symbol of sustainability, thanks to the multiple uses not of the fruits but of the “shovels”.

Read more about all the possibile uses of prickly pear

Plates, glasses and jugs … with the rooster

Another object that transmits the feeling of Puglia at first sight :are the plates, glasses and pitchers in terracotta with the cockerel.

These objects are present and very used even in everyday life by many local families.

The origin of this objects dates back to the times of pagan divinities, when the rooster was associated with Mercury, god of merchants and craftsmen; even in the 6th century BC, at these latitudes there were roosters on plates and vases of various materials, as anyone visiting the Grottaglie ceramic museum can see.

The rooster then took on, in the very strong peasant tradition in Puglia, the value of the pet, a symbol of protection and a bearer of wealth.

Often in the decorations of cups, glasses and jugs, it is accompanied by stylized gold or dark blue flowers, used to accentuate the noble and sacred value of the rooster.

Today this is still a tinsel Apulians don’t give up at home: they give a sense of home, of welcome, they bring us back to the right place.

As you see, what you buy as a souvernir has a story and a value. They are far more than objects.