The old historic centers of Salento hide treasures; not only squares and bell towers, but also hidden corners worthy of observation.

Small squares where the stories of entire families have grown up, alleys where the layers of history have drawn surreal scenarios that cannot be found elsewhere, small glimpses you can only see by walking and entering, slowly and respectfully, in the twisted alleys that branch off from the topographical centers of the small towns.

In these scenarios there are small kingdoms, historic homes made of stone and history, hidden behind portals that are sometimes huge, other times more discreet, which amplify the sense of immense surprise once opened.

Mediterranean courtyards, terraces overlooking the streets, places almost invisible if not seen from the inside: this is the magic of the villas in the oldest and smallest historical centers of the Salento villages.

Read our itinerary through 5 villages of the Salento inland

and about the most beautiful villages over the sea

A large courtyard is the first thing that appears in front of us entering from the streets of a small historic center of Salento, in Corte di Pietra.

This dwelling has a name suited to its royalty, with Mediterranean vegetation and succulent plants, whose walking surface, in a portion of the central part, is characterized by the emergence of irregular natural rock without leveling paving covers, simply cleaned and deliberately left so to make the atmosphere of the place more typical.

This area reflects the ancient way of life, when the outside was as important as the inside, if not more.
Corte di pietra, a charming house finely restored following the principles of conservative recovery, tells a lot about the ancient lifestyles of the people, in which the interior protected from the cold in winter and from the heat in summer, thanks to the thermal regulation of the stone, and the external areas were the place where a good part of people’s lives took place in the very long beautiful season of Salento. 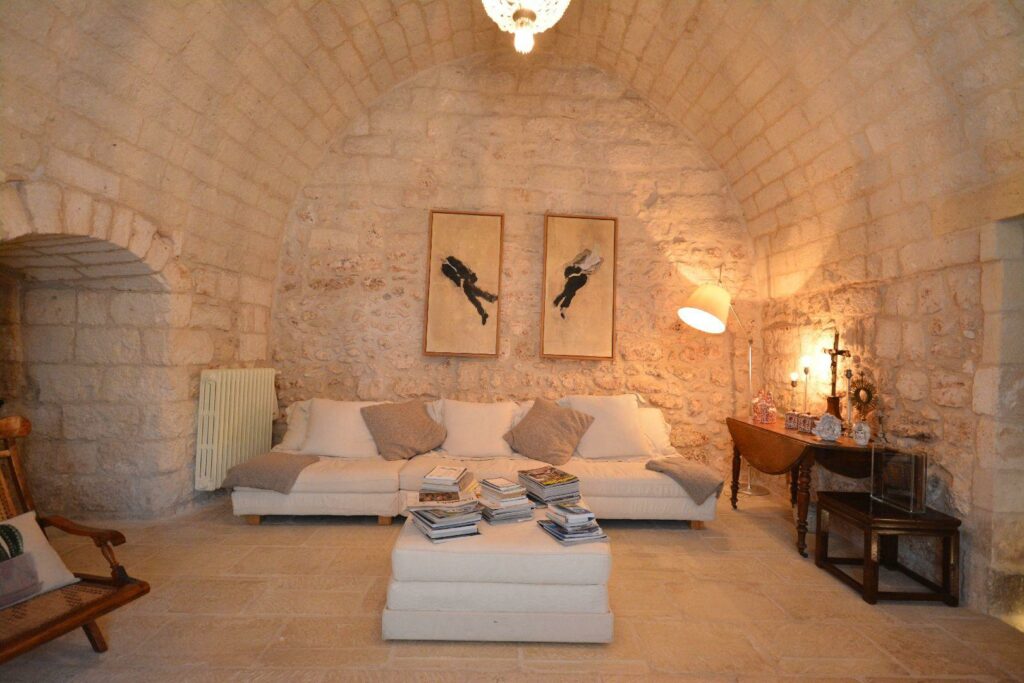 The rooms are gathered around the central courtyard, and the local stone takes on different shades of color and warmth from inside and out, from season to season.
The vaults and the original drywall sections also represent the architectural features of the area, which have been beautifully recovered from the restoration works and enhanced by exposing the natural living stone. The atmosphere there is warm, welcoming and elegant at the same time.

There is a villa set like a gem in the alleys of Muro Leccese which, in addition to being a charming house, has the sacred atmosphere of a small private museum of contemporary art.

Art in Salento is taken seriously;
Modernity has led more and more people to take an interest in modern art and to transport it into everyday life, precisely in the furnishings.

So Palazzo Artes, in the heart of Muro Leccese, a Salento village definitely worth visiting, looks like a fantasy of art, peculiar furnishings and light coming from all directions; all overlooking a garden that seems the secret and private continuation of the colors of the historic center that encloses it.

Salento is a place where charming houses know how to be a continuation of historical, landscape and artistic heritage, thanks to the care of the owners and the expertise in the reconstruction, renovation and restoration of the oldest residences.