There are so many fans of car trips! No timetables, the freedom to change itinerary whenever you feel like to, being able to be 100% owner of your own way and follow your own rhythms, that’s what freedom really smells like!

A trip down to Apulia is particularly well suited for the “on the road mode” because it gives the opportunity to see it all in the long distances that separate the north from the south end with a pace which is slow and contemplative.

The southest south, Salento, is amazing and easy to trael by car, and today we want to indicate you the steps to travel by car on the Adriatic (east) coast.

Let’s assume that Lecce is our hypothetical starting point.

Whether you want to visit or revisit Lecce at the beginning or at the end of your route, we suggest you to park your car in one of the parking areas outside the walls of Porta Napoli and Porta Rudiae. Always in this area, you can also search for free parking in the parallel street of Viale dell’Università. From here you can start walking the beautiful streets of the old town, admiring its golden stone monuments, enjoying a rustico and / or a pasticciotto sipping ice coffee with almond milk, or one of the excellent local craft beers. 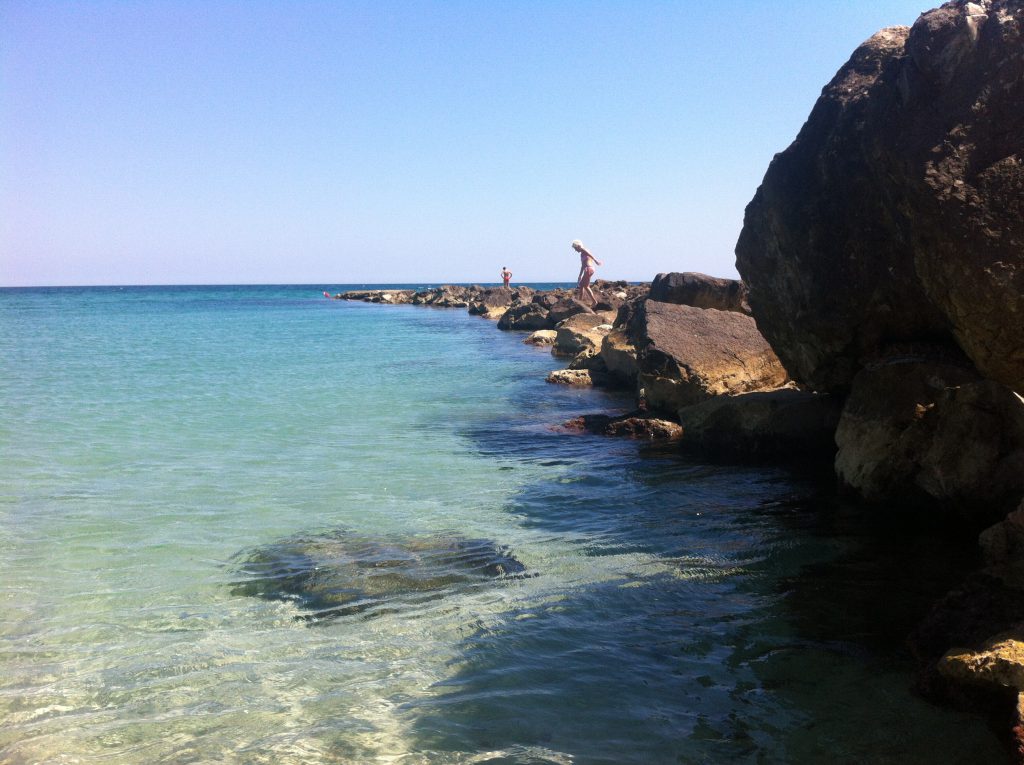 Don’t let your daily dose of hedonism and beauty run out in Lecce, there’s a lot of beauty to travel.
10 km from Lecce, along a straightway accompanied by oleanders or along the motorway in the direction of Otranto / Maglie you will get to San Cataldo, whose waterfront (Vespucci) alternates beaches at lidos. Take some lupins and have a nice walk…

Here you’ll find a youth hostel in the green of a pine forest, with a sea view suitable for young and wandering spirits, as well as all inclusive resorts giving way to families and to those who want more relax. 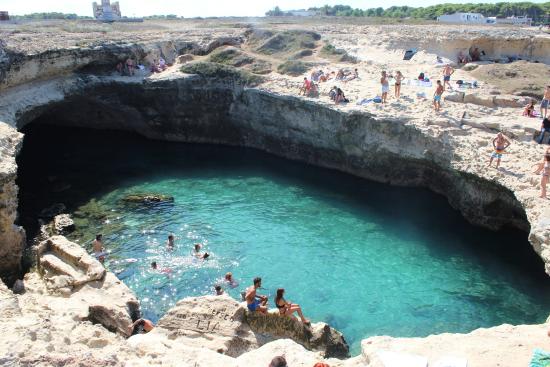 Driving along the coast by car, from San Cataldo we head towards San Foca. Leave the window open to breathe the intense smell of Mediterranean vegetation and the sea. Arriving in San Foca, we are in the Melendugno area.
This sea was awarded as one of the cleanest seas in Italy, so you must have a swim.  Then stop for a lunch or just a drink in one of the small restaurants along the waterfront Matteotti. Recommended choice: fresh sea urchin and spaghetti with mussels.

Close to the village, you’ll admire one of the most portrayed landscapes of Apulia, Grotta della Poesia (Cave of Poetry), bright blue throat and natural pool to make breathtaking dives or where to softly enter from the steps made by man and nature. 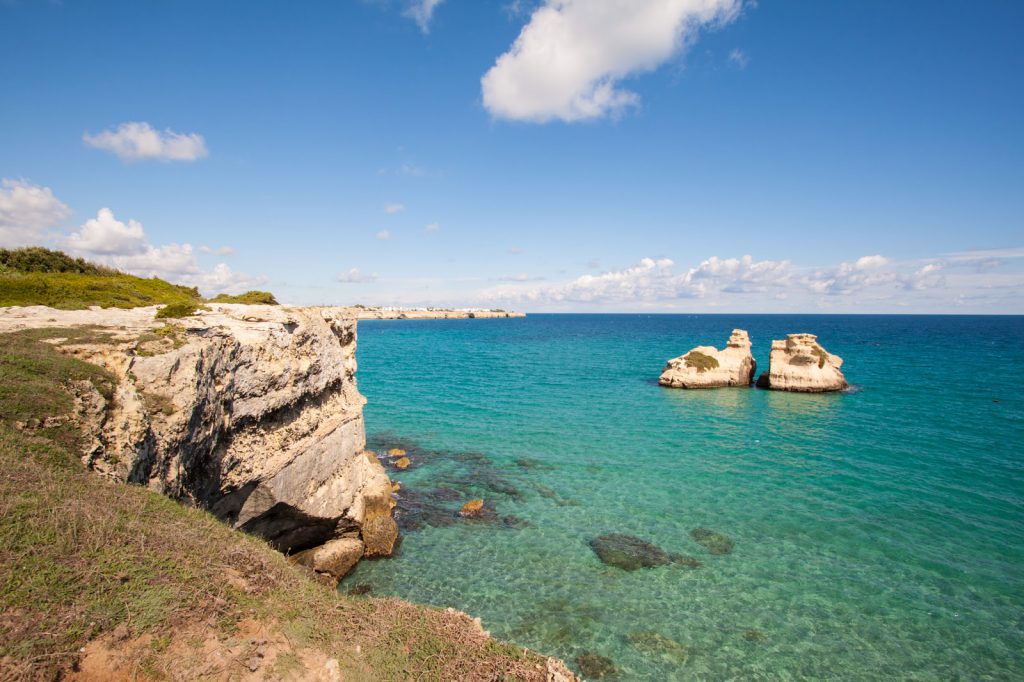 The next destination, beloved by tourists and by locals, is Torre dell’Orso and its coast. The trait that unites these two locations (San Foca and Torre dell’ORso) is a watercolor that sums up the essence of the territory, including drops of purple bougainvillea, blue of sea and sky, and various shades of green.

Torre dell’Orso  is surrounded by a reef that hugs a long and soft sand beach. Not far from the Giardini del Sole (public gardens) there is a parking area and in July and August it’s recommended leaving the car here because finding other places could be difficult.

If you’ll overnight or spend a part of the night here, have a drink at La Casaccia. People, good music and vibes, a sea landscapes that you’ll remember forever.

Slow down as you continue on the coast road San Foca – Otranto, so to admire the incredible beauty of the landscape: lumpy, dry at times and very green in the others, dry walls and farmhouses, some decadent other reconditioned and restored to their original splendor.

This road leads to the Lago Alimini Grande, separated from the beach and the sea by dunes and pine trees.

After a break of a few minutes or a few hours to admire the sea, flora and fauna, you can head to Otranto.

If you want an accomodation suitable for your dream travel, we have some offers for you!

Park your car at the harbor and go walking in the old village, in its narrow streets and in the upper parts from whose walls you can admire the sea and moored boats, sipping local wine.

You can choose to enjoy the small strip of beach at the foot of the city or get away on distant beaches (in this case you will need to go either by car or local shuttles).

If you love the night, spend it here. An evening overlooking the sea, the lights of the lighthouse, the sounds of the town and its food smells and the sea.

Then resume your journey on the road in the direction of Porto Badisco, along the coast Otranto- Santa Cesarea.

This small fishing village should be lived on foot: park in the designated area and reach the bay and its beach.

When you’re ready to leave this piece of land, return the car and go in the direction of Santa Caesarea, on the coast Otranto- Leuca. Considered among the most beautiful cities of Salento and Apulia, for its flower gardens and skyline of nineteenth century villas overlooking the sea.

Here, the access to the sea is more complex but it’s worth it: you can reach it by stairs leading where the sea is crystal clear but the coast is almost entirely rocky.

Towards the coastal road Santa Cesarea- Castro, stop about three kilometers north of Castro to admire its beautiful Zinzulusa caves (park in the designated area and walk to the rock).

The cave is one of the most important evidence of the Italian karst phenomenon, with its rocks that look like hanging rags (“Zinzuli” precisely., In the local dialect).

Take a breather and the car and proceed in the direction of Gagliano del Capo, continuing on the coast Tricase- Leuca. Slow down and admire the Ciolo, considered a small canyon that stands out in the blue. If you love breathtaking dives, park the car and challenge your courage (it is among the most popular places for diving).

We come to the end of the earth, Leuca, on the rocky coast between Punta Ristola (West) and Punta Meliso (east).

Let’s get up to the sanctuary of Santa Maria de Finibus Terrae to admire a panorama that will be the crowning of your journey on the road: the water line that separates and unites two seas, to contemplate staying there, where apparently we can no longer go beyond. And despite of this, you’ll keep on travelling because a travel doesn’t end at the end of the earth.