Previous Interior: when color matters.
Next 5 healthy morning rituals to be enjoyed on holiday
Spread the love

All this and more, in a itinerary hat goes from the Ionian to the Adriatic coast.

There are those who travel to Salento every years and those who has lived in this land forever but still don’t know some precious rarity to discover among the beautiful beaches and green areas of the territory.

Let’s find out some of them, in this itineraries.

Let’s start from the Ionic slope, which the locals love to choose as the sunset wind blows. 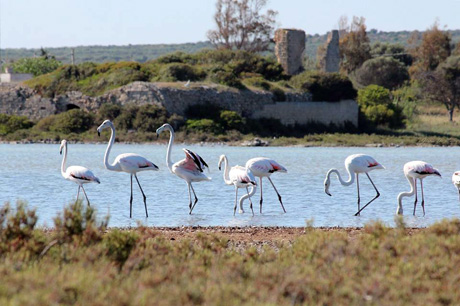 Have you ever heard of the Campomarino Dunes in Maruggio? It is five km rich in botanical rarities like shrub thyme and marine junipers. There are feew equipped areas here, where everything remains wild and protected.

Continuing to the south, for San Pietro in Bevagna, there are important natural reserves: the Chidro River, which originates from a deep underwater crater, the old Salina dei Monti, from the cold waters and separated by high dunes from Torre Colimena, 25 hectares for Pink flamingos, sand dunes and transparent sea.

After a few kilometers, following the coast to the tip of the peninsula, few people know that there is a protected marine area just in the famous resort of Porto Cesareo.

Following the so-called blue paths (ask for the Sentiero Blu) you can discover the coraline formations, the posidonia meadows and the many caves where you might bump into archaeological finds such as the Roman columns just a few meters from the coast.

In addition to crustaceans and turtles, the queen of this sea is the Turritopsis nutricula, the immortal jellyfish, the only organism that can reverse its biological cycle and never die.

On the surface, after the succession of well-equipped and chic lids, there is the peace of nature at Torre Squillace and the magnificent Bay of Sant’Isidoro, with hundreds of botanical rarities that slip among the sponge, depressions in the saltwater soils of brackish waters, And the spectacular waters of the Natural Park of Porto selvaggio.

Crossing the great Aleppo pine forest, you can reach the tiny pebble beach to dive into the green-blue bay. Next to it, small coves, former Messapic quarries, where to bathe in the numerous fresh water springs.

Gallipoli, and its long bay, are two steps away. After the succession equipped beaches  in the Green Bay, we come to what has been called the Sant’Andrea – Punta Pizzo Regional Park since 2005.

From the Maldives to California.

The coast continues in a succession of beaches until Torre San Giovanni, with free Californian-like beaches and rocky areas, before reaching Pescoluse, one of the most beautiful Salento beaches with dunes covered by Wild lilies and fine sand and a sea of many compared to the Maldives.

Once arrived in San Gregorio, in Felloniche, the rocky coast begins.

For those who enjoy scuba diving and breathtaking diving, the Ciolo is the right place to be, a spectacular creek four-kilometer drive from Leuca.

From here up to Otranto the coast is in fact tall and drawn by bays, caves, fjords, and landfills, while land access is rare and difficult.

You cross the sea small port cities of Tricase Port, Castro, Miggiano, a golden cliff with an emerald sea, and Santa Cesarea, a renowned spa resort since 1899 with numerous sulfur water springs.

To the north of Otranto, the Baia dei Turchi is worth at least one bath, although the times when this small creek was unknown to mass tourism are gone. The same must be said for the Alimini coast: surmounted by majestic pines and Mediterranean blubber, beaten by the wind and highly appreciated by surfers.

Then come back to the free beaches where to practice kitesurfing, shaded by low reef cliffs on which spartan chapels stand out for an appetizer based on curls and mussels.

The Melendugno marines, from Torre Sant’Andrea to Torre dell’Orso and San Foca, to the Natural Oasis “Le casine”, will maze your eyes. Two trails can be visited: the wildest one that leads to the high bird watching observation towers, and the didactic one, also equipped for people with disabilities.

To breathe still nature and silence, you have to go a little further north, in the area of Brindisi, in the protected natural area of ​​Torre Guaceto and in the Ostuni area with the 8 km of coast where Torre Canne and Torre San Leonardo enclose the beautiful Coastal Regional Park.

Find the perfect place to enjoy your stay in Salento